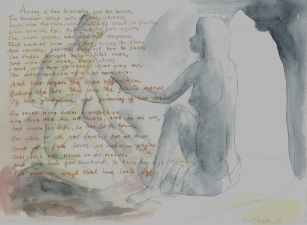 Among Al This To-Romblen (Geoffrey Chaucer, from Dido Queen of Carthage)
2008
watercolor
12" x 8"

For years I had wanted to 'illustrate' poems that moved me but I never understood what would work for me. The first one that stayed in my head in my 20's always held the key to how to do it but I could not see it.

I heard a noise and wished for a sight,
I looked for life and did a shadow see
Whose substance was the sum of my delight,
Which came unseen, and so did go from me.
( Anon. !6th c.)

Then when I was in my 60's talking to an painter from England, Timothy Hyman, who liked to take Moleskin accordion sketchbooks and illustrate them with images of his life, some realistic and some fantastic. Had he ever 'illustrated' poems I asked? No, he replied, adding 'I am too old to do it now, and so are you'.
That must have been what I needed because the next day I did my first poem drawing, starting with the anonymous "I heard a noise" poem. I had finally found my formula. If I took a poem that I did not associate with anyone else, one that I had heard no one else read or comment on, a poem that gave only a hint of physical description so I would not get pulled down into illustration, and if I let myself be moved by the mood rather than the facts of the poem I could find a sensibility that was offered by the poet to me to use, and I could build on that. After doing some of my favorite poems in this way I next went to searching for poems that were new to me so I could think up my image during that first surprise of the poem. i did about 50 poems during a year and then my mood shifted and I stopped.
Will I return to them? Yes, if I can find the new equation.

On my poem drawings


When I work from my imagination, as all these poem drawings are from my imagination without recourse to any photos or other people’s visual artwork (I often work directly from life, but not here) I look within and of course see ‘myself’. When I read a poem I see, to some extent, some one else. Which is a reason I like reading poetry, To see a different self - of at least a glimmer of one. I can get quite excited reading a poem, especially on a first reading. When doing so I feel am in a new place. Could I, I wondered, take a little of that poet’s viewpoint, the poets self really, and use that as a subject matter and under the influence of this move in another direction?
I gave myself rules on how to do this. I would only use poems I had discovered ‘on my own’ not ones that had been presented to me by the world, in a classroom for instance, or by popular acclaim. No Stopping by the Woods, no matter how great that poem really is and no Shakespeare who has been represented so often. That was so that my vision of the poem would not be contaminated by an association external to the poem.
I have to hunt a bit to find a poem I can use. A too descriptive a poem does not work for me because when the poet has already created a full image I would just be illustrating. Also I do not wish to be bound by the literal description in the poem. I want to be able to make changes. I am after the feel. On the other side many poems contain no hint of anything that can be depicted. Those do not work for me. I need a poem that has a gesture of a image. I also need a poem where the poetic word construction is in my mind as much as the description.
I started by choosing favorite poems that had been in my mind for years, then I went to looking thru poems previously unread, searching for a moving one and then getting to work immediately so the setting down of the first idea would be very close to the first rush of reading.

But as I would do these poem drawings, seeking to bring something of the other person into my work, I would wonder if it was really possible? Aren’t I really just seeing my self in other peoples art? A little bit of their personality I may see - I may see a crabby T.S. Eliot or an exuberant Shelley, but how much deeper? I may be deeply moved and admire their image and poetic construction but can I really jump over the wall and see them? It may be that my idea of finding different roads by allowing poets’ influence to enter would not work. But perhaps there is a stronger argument that says it can. 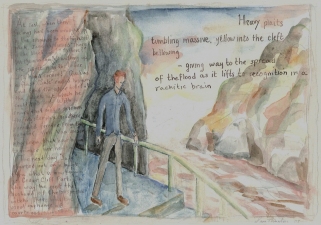 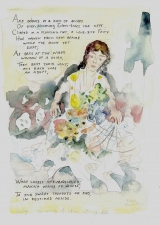 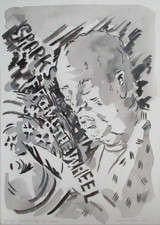 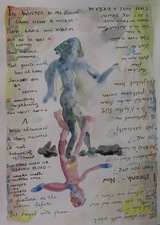 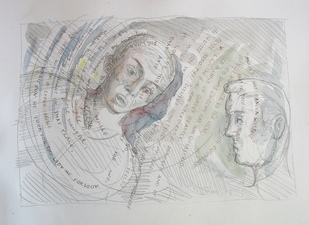 "And In That Wter anoon Was Seen..." from Chaucer's translation of The Romance of the Rose
2009
pencil and watercolor
11' x 8"